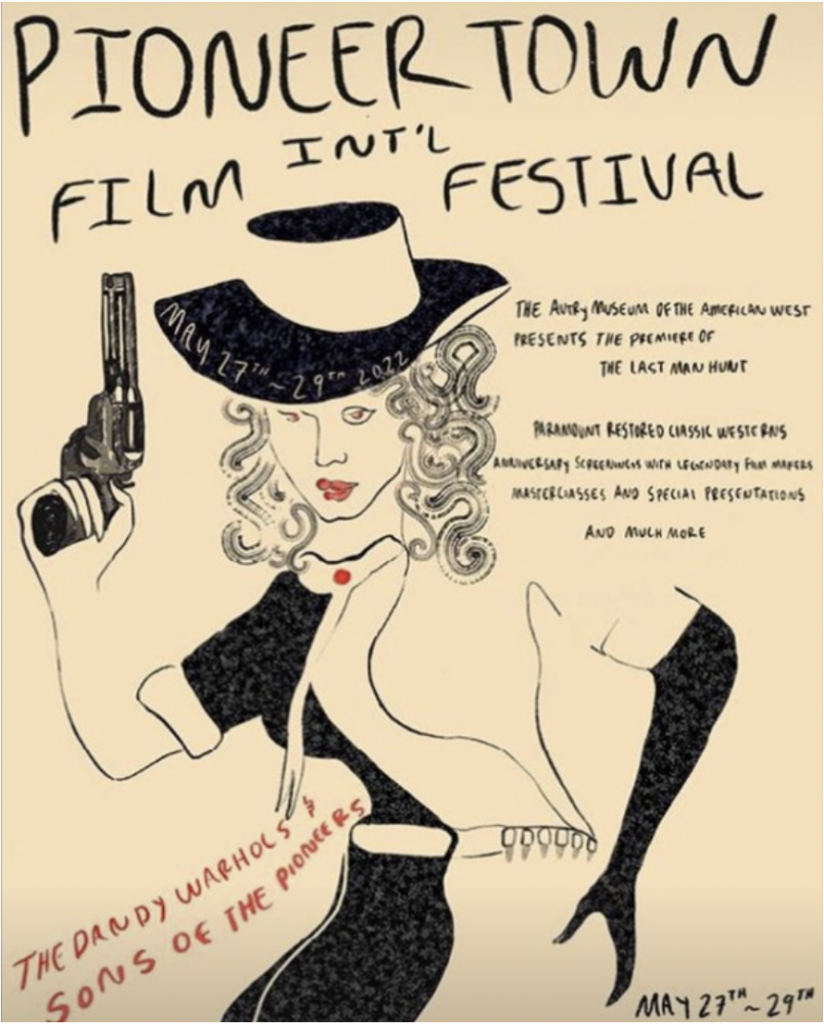 2022 Lineup including the world premiere of the Jason Momoa-produced and starring in the Western, “The Last Manhunt.”

The inaugural festival, presented by Fistful of Bourbon and The Autry Museum Of The American West, will be held on 27-29 May 2022, in Pioneertown, CA, at the original studios built by Roy Rogers & Gene Autry in the 1940’s as an Old West movie set, repurposed for the occasion.

Pioneertown International Film Festival will be a 3-day immersion experience celebrating the Western genre, independent cinema, and the American culture of the west, with themed film screenings, masterclasses, live music, and screenings under the stars that will transport you to the heart of the American frontier.

Filmmaker Julian T. Pinder, and head programmer, Todd Luoto (formerly of the Sundance, CineVegas, Newport Beach, and Silver Lake Film Festivals), are excited to announce the 2022’s full line-up, which will feature an opening night performance by The Dandy Warhols, the world premiere of The Last Manhunt, produced by Jason Momoa / directed by Christian Camargo, that tells the tragic true story of the last great American manhunt of the old west, based on the oral history of the Chemehuevi tribe – located in the festival’s founder, award-winning Joshua Tree, CA – who will be present with the cast, for the screening.

An American Tail: Fievel Goes West, a Special Presentation of the Acid Westerns of Jack Nicholson and Monte Hellman, presented by their respective daughters, a screening of Amigo The Devil: Caving In featuring the “murder folk” balladeer directed by COURTNEY GAUGER, a special program of Stupid F*cking White Man: The Indigenous Image in Westerns curated by programmer and filmmaker ADAM PIRON (Kiowa/Mohawk), Director of the Sundance Indigenous Program, and joined by filmmaker and one of the directors of FX’s Reservation Dogs series BLACKHORSE LOWE (Navajo Nation) as they discuss the legacy of Jim Jarmusch’s Western Dead Man, and many more.

The closing night will feature a special screening of Alexandre O. Philippe’s Western documentary The Taking, and a live performance by The Sons of the Pioneers that will conclude the 3-day festival.

Special screening at The Autry Museum Of The American West :

The Autry Museum Of The American West, associated with Pioneertown International Film Festival, will be showing an exclusive screening of ‘The Last Manhunt’ to their members, as well as offer free entry to the museum to all the festival’s attendees up until the end of the year.

A wide range of industry professionals and celebrities will be in attendance, including many of the filmmakers whose films are being showcased or premiered : multi- hyphenate film talent and celebrated special effects makeup artist ROBERT KURTZMAN who co-produced and originally conceived the idea for From Dusk Till Dawn, director PHIL NIBBELINK presenting an anniversary screening of their Western animation An American Tail: Fievel Goes West, producer GRAHAM LEADER presenting special screenings of his iconic Outlaw Country documentaries Heartworn Highways & Heartworn Highways Revisited, the CAST of The Last Manhunt, LISA OGDIE who is the North America Cinema Programmer at Soho House, and many more.